A review of all the things that didn't work.

By now I think I've gathered some knowledge on this subject. 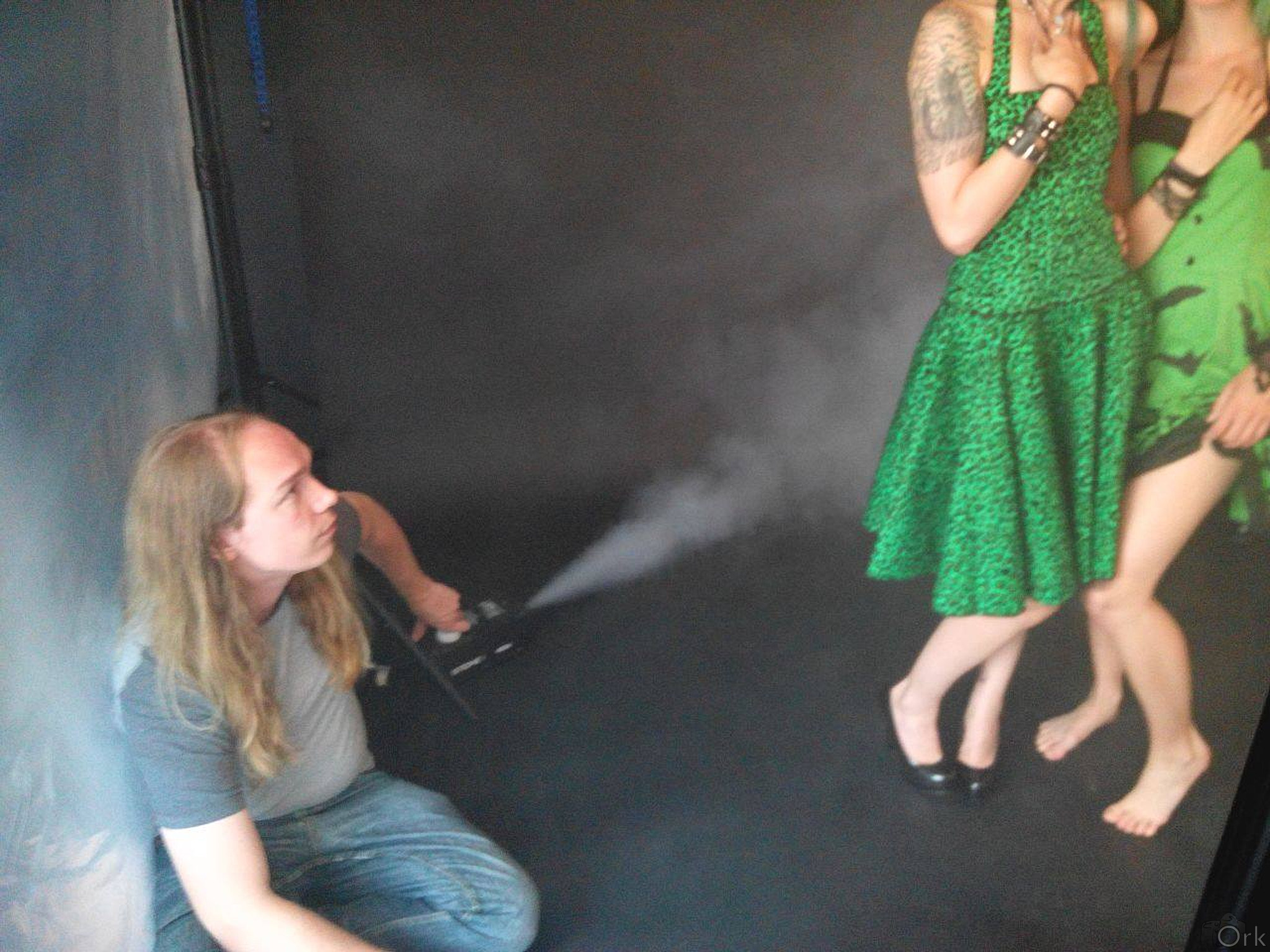 So I am writing it down! Not because there aren't plenty of reviews on smoke machines out there already, but because those tend to focus on how to properly smokify theatres or large venues, or on how to create long lasting types of fog for large audiences. And, while amazing, they seldom reflect on my specific usecase: smoke that looks exactly perfect for that one shot, and then dissipates almost immediately, so I can think about what type of smoke I want for the next shot.

In essence: I need smoke that is exactly there when and only when I need it, then stays perfect for a few seconds, and afterwards is completely gone.

This is going to be a long post, and there won't be an option to like & subscribe either. This means it's dry stuff, which will cost you some energy to read, but hopefully you'll gain some knowledge by doing so. I'll touch up
on the various types of smoke machines I've used in the past, and what I liked and disliked about them. I'll explain what I use now, and why I use it. I'll dive into some details about fog juices and then of course some photos! Because photos.

Note: though I'll mention several machines, this post is not sponsored by any of them and reflects my own unbiased view. That said: if you happen to own a company that has the latest and greatest of fog machines ever - please do contact me! I'm always on the lookout for better fog! ;)

Stuff I used in the past

Things that I dislike:

I eventually learned that cheap means bad, so went with a slightly more expensive bracket and that seemed to be more reliable. I'm currently using a Ayra WSM 02, mostly because it stays warm (so no cooldown interruptions mid shoot) and you can dim the smoke intensity. That's all I need.

This is the type that creates a thin almost-invisible layer of smoke intended for theatre spots to have nice visible beams. I've used these once or twice, but they don't fit with my style often and I can fake the effect with other smoke machines easily enough. I never got one.

Now we're talking! Ground foggers produce smoke that stays on the ground! I love that aesthetic! These typically work by blowing the smoke of a regular smoke machine across some kind of coolant which causes the smoke to cool and the fog to stay low.

Lately I've been using a lightmaXX Vega Mini Low Fog for this. That's a fogger that uses ultrasonic vaporisers to create an ultrafine mist of water, causing it to cool well enough so that it stays on the ground for quite a while. I am really in love with this effect, and will continue to experiment with this set up for the time being! I'll update this post when it breaks down :)

The biggest downside of smoke machines is that they require power. Lots of power! So in my quest of to achieve the perfect smoke-on-location I tried various things. 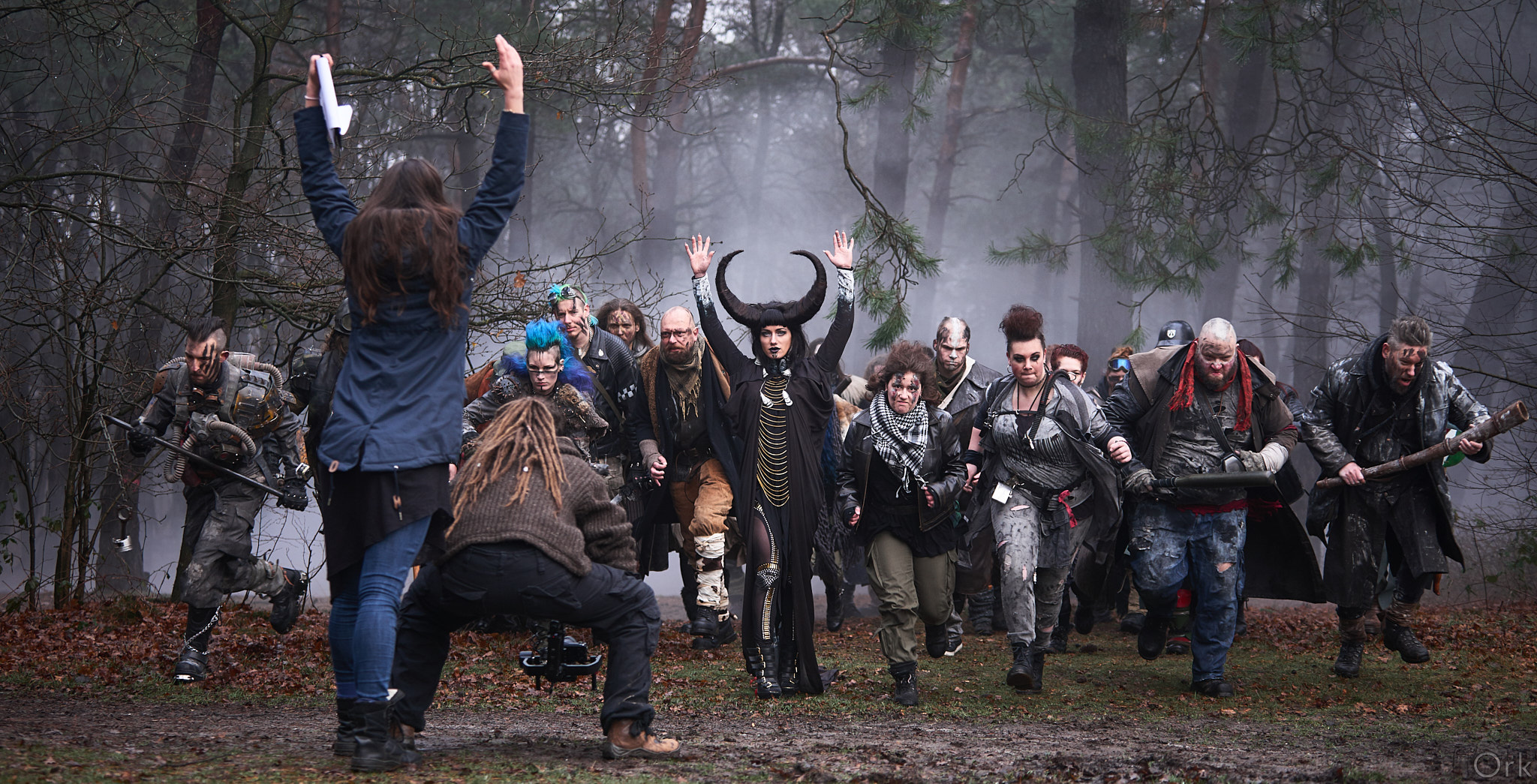 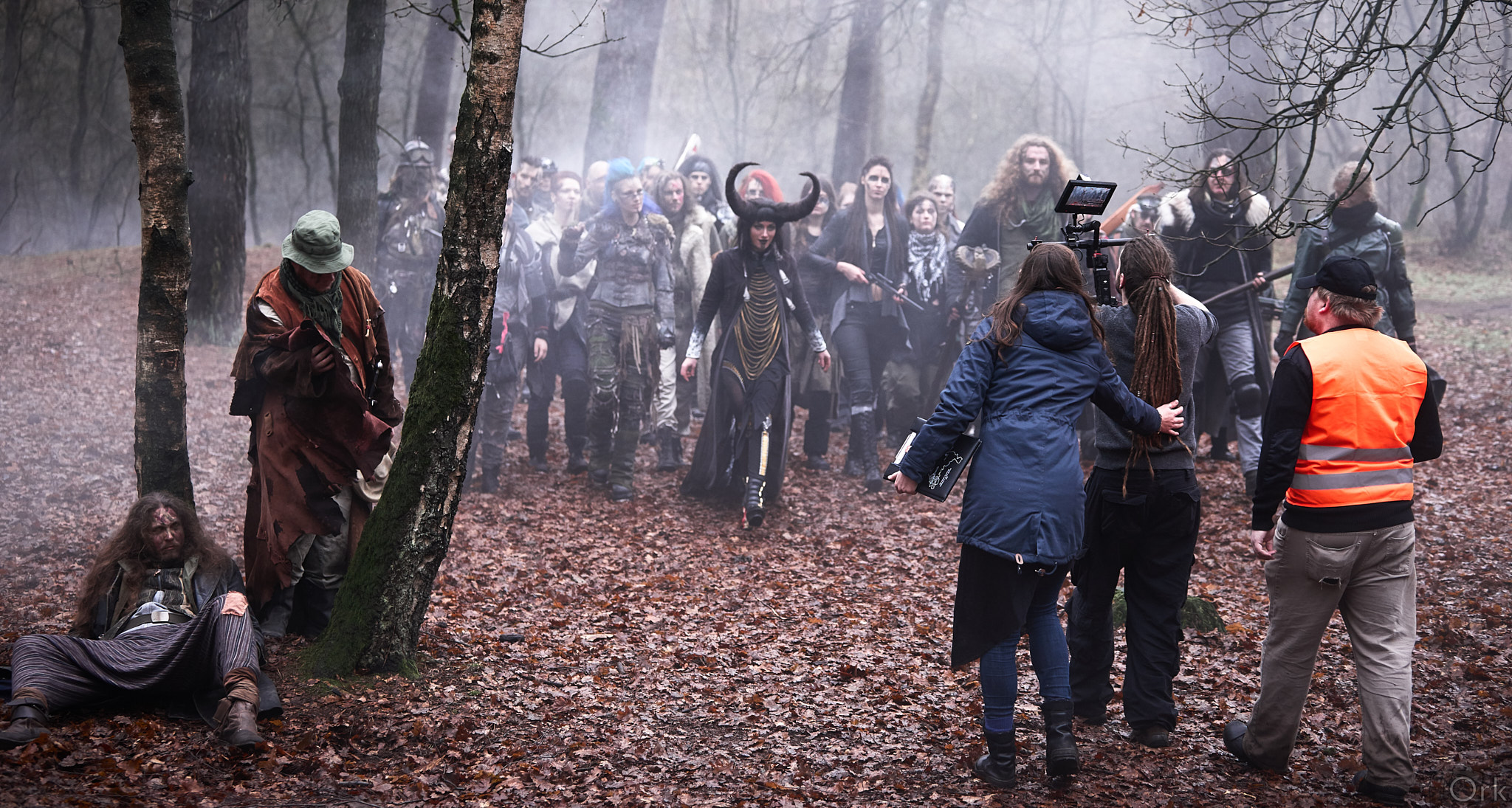 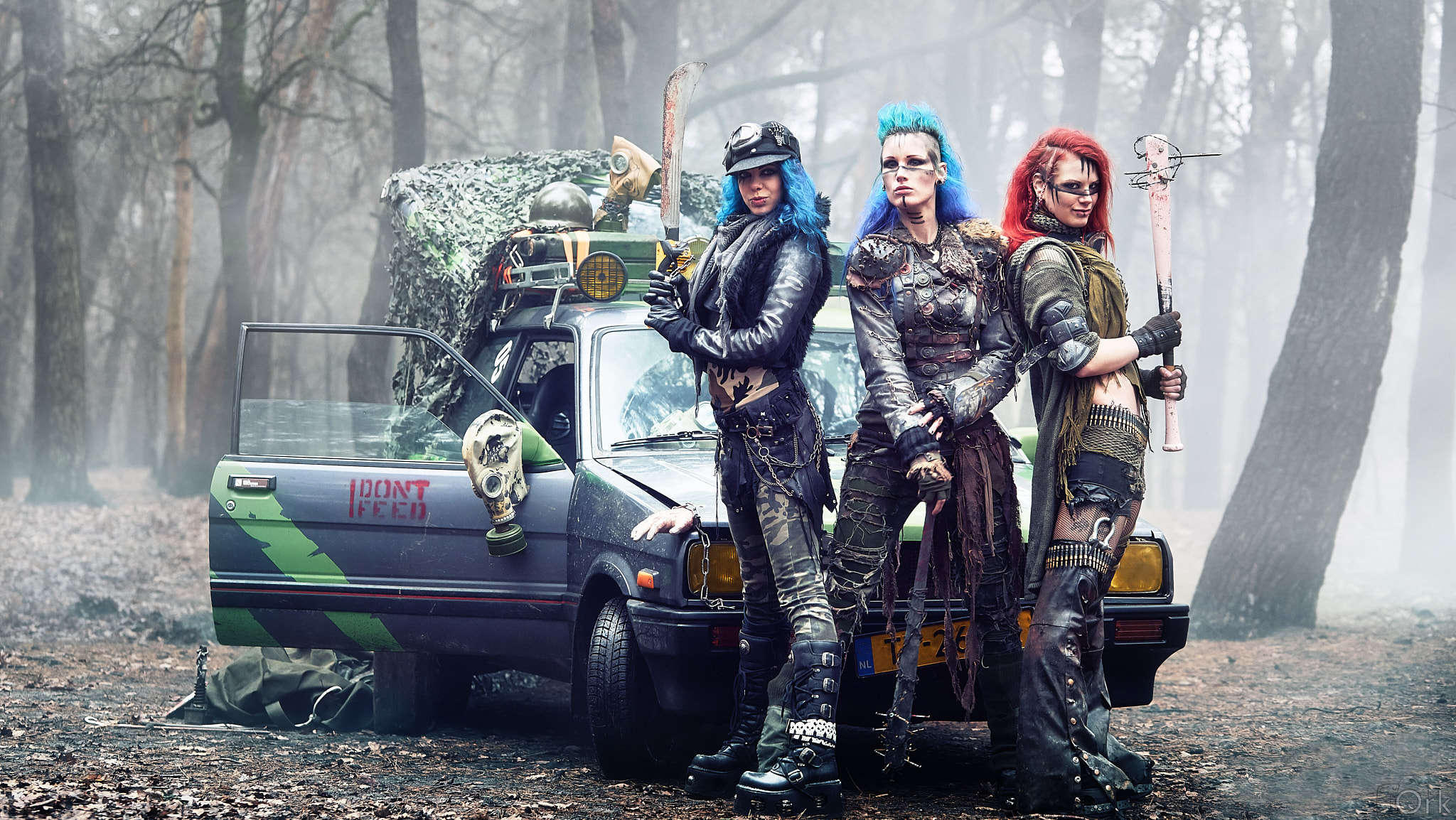 Not kidding about those forests with power plugs though. Here are some BTS shots I took during the video recording of Shireen - UMAI which I smoked exactly using that.

I ended up getting me a Smoke Factory Scotty MK2 - a portable smoke machine that's instantly ready and powerful enough to create thick layers of fog when you need them. Not cheap. But perfect!

As a side-note, but good to mention here as well. Don't believe all you see - I often enough just add smoke and haze layers to my photos during postprocessing.

See for example my recent post of Pixie in pixelworld or the image to the right of Shireen, taken back in 2010, and containing one of my first experiments with photoshopping in digital smoke. 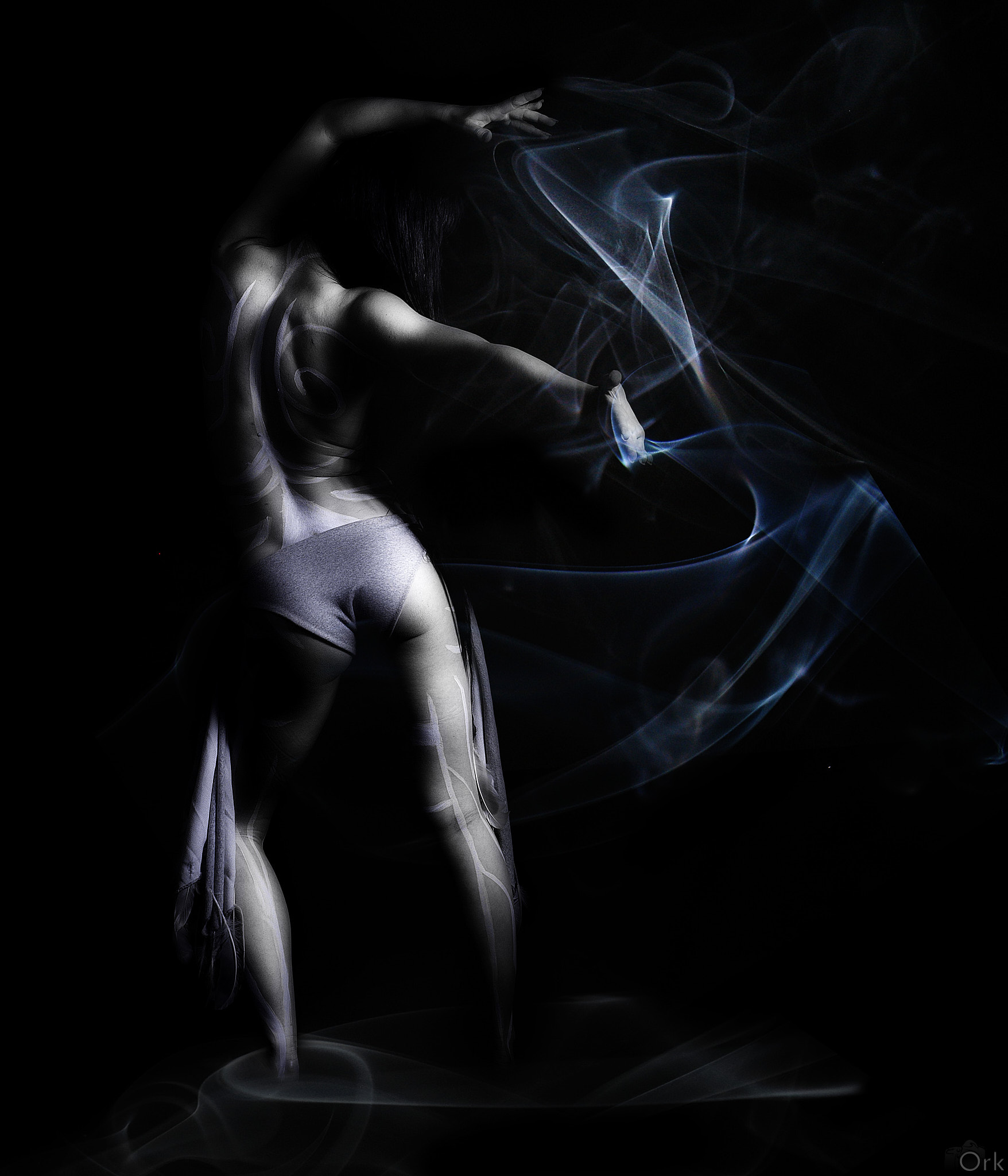 What about smoke fluids?

This is where it becomes interesting! The type of fog fluid you use will have a large impact on the type of smoke you'll get. "Light" fluids will produce more hazy, see-through smokes that are typically shorter lasting, while "heavy" fluids will typically produce thick dense fogs. I typically love the more denser looks, though most commercially available liquids unfortunately also combine "dense" with "long lasting", which I find to be annoying.

If you go online and search you'll typically find fluids that are "light", "medium" or "heavy" from both cheap and premium brand variants. Each brand typically notes in the manual of their fogger that using any different brand than their own will invariably destroyify your machine, and more, your warranty! This sounds a bit like scare tactics to me, so I did  some  research.

I am not a chemist, and others have explained this better. Here's my take on it.

Cool! So, that means I can mix my own right? From what I understood, I should start with propylene glycol as it seems to be the stuff that allows rapid dissipation. I got a bottle of PG, readily available due to people creating their own vape fluids for some reason, and started mixing it with purified water. My notes so far:

On the topic of safety

I am not a medical expert. I am not an expert chemist. I have zero clue how lungs actually work. That said, I only have one pair and I'd like them to function perfectly, thank you. Experimenting with foggers and mixing fog fluids means mixing stuff that you will then potentially put into your lungs. As such, read before doing. Check the safety studies listed on Wikipedia and the ASEPO. Want to experiment? Have fun! Read those first. Then read more. Not just for your sake, but also those of your models.

What was my take on safety? Ventilate. Limit exposure. Short directed bursts of smoke are probably better than hazing up the entire room. Finally, always be wary of signs like people coughing or having respiratory problems. If so: leave the area immediately. This hasn't happened yet, but that doesn't mean I am not paying attention to them.

At the moment, I am back to using premium brands of fog fluid during shoots. Less hassle, less danger. I will continue to read and learn though, and if medical experts are reading this and have better views on this, ping! I'll update this bit.

I am not done with smoke. I'll continue to explore! Over time, I expect to update this post with new insights and new ideas. If you have read this article, then thank you for reading! If you found it useful or used ideas listed here in any of your productions, I'd love to know! Feel free to send me a message.

And because this site is about photos - below you'll find some!